The Oracle Java 7 JRE (a web plugin) began shipping last year, and has grown a small maze of clever mechanisms to maintain a schedule of checking for updates. It’s a sad tale of the misuse and abuse of launchd schedule re-writes and re-loads, the Sparkle Framework, storing Java properties-like prefs in OS X defaults, and having two different systems that actually check for updates implemented in two different languages and runtimes.

I covered this earlier this year in a couple posts. It also prompted me to write an overly-opinionated recipe for AutoPkg. 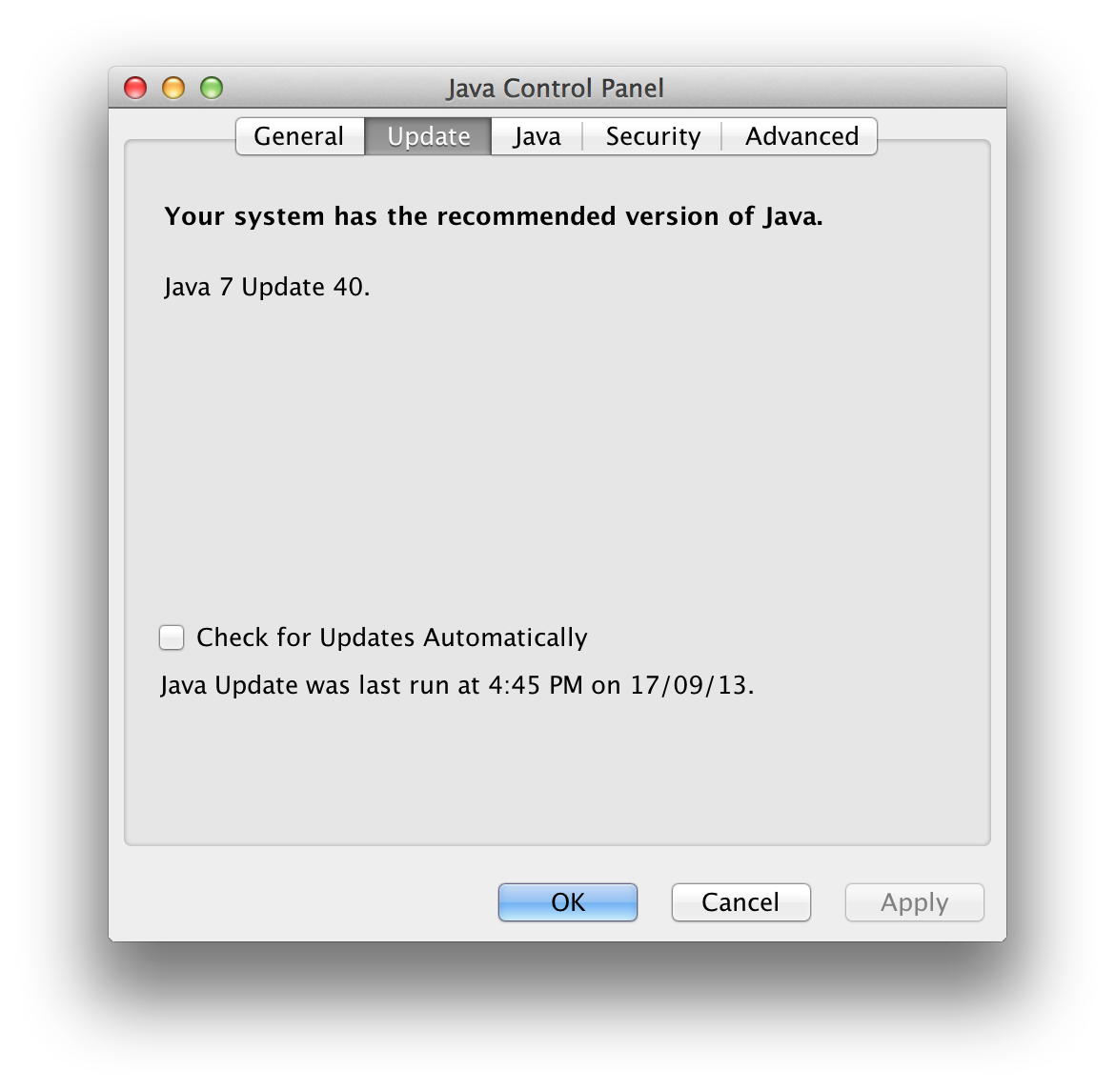 The takeaway from those previous two posts is that the plugin has a mechanism triggered by the applet to check for updates, but because this only runs once the plugin is loaded via a browser, there is also a background-check LaunchAgent that prompts the user to install the latest version via a Sparkle dialog (a process which later goes and re-loads LaunchAgents as root instead of you, but read the earlier blog posts if you care.)

Now that Update 40 has been out for over a week, I’ve taken some time to look at the changes to the installation that should be of interest to anyone deploying it en masse.

The background-check LaunchAgent at /Library/LaunchAgents/com.oracle.java.Java-Updater.plist (actually symlinked to a location inside the plugin’s bundle) now runs the Java Updater binary with a new flag: -bgupdate, and this respects a preferences key JavaAutoUpdateEnabled. Full credit for picking this up goes to kbotnen in the ##osx-server IRC channel.

We can make use of the JPI_PLUGIN2_DEBUG debug environment variable to get some console output to test this assertion:

Then set the pref and run the updater:

Let’s switch it back off to test what happens without the preference set:

So this takes care of the background updater. From now on, it should no longer be necessary to do silly tricks like unloading and removing symlinks after every installation just to disable it. But for the Java applet itself performing update checks on loading, we’d like to be able to disable these too.

I’m no Java developer, but as far as I know it typically uses XML or ‘properties’ files to store data (the latter especially for configurations or ini-like options). If I look at filesystem changes when unchecking the “Check for Updates Automatically”, I eventually see a change show up in my user’s folder at ~/Library/Preferences/com.oracle.javadeployment.plist. This is essentially a plist representation of a the properties file, and the key of interest is deployment.macosx.check.update located within the /com/java/deployment/ dict key.

Going back a step, this key also gets set automatically when the Java Control Panel loads and there are 1) no prefs yet in the com.oracle.javadeployment domain but 2) the JavaAutoUpdateEnabled key is set in com.oracle.java.Java-Updater. So it’s possible that it’s no longer needed to manage anything in com.oracle.javadeployment. However, it only gets populated if the Control Panel is launched, not on a regular loading of the web applet. It’s hard to tell whether this matters, because testing this on the latest release obviously won’t prompt about a new update being available.

If we did want to pre-set this properties-style pref anyway, it seems we can put this plist into the any-user domain at /Library/Preferences/com.oracle.javadeployment.plist instead of the user’s, and we can whittle it down to the essential key:

It’s possible that without adding some of the version-specific properties settings the applet may still warn about outdated versions, but I really prefer to not add version-specific tweaks with every update, even if those tweaks can be automated - they’re just one more thing to break and keep track of.

Surprise! The installer has gotten worse

Note the install.jar file referenced up on line 6, which is executed by the newly-installed Java runtime. The java.settings.cfg file doesn’t get installed by the installer payload, but is assumed to exist when invoking this command. Maybe this is optional support for a deployment configuration file that can customize the installation. Either way, the script doesn’t care to check whether it exists, and so this command will spit out a Java traceback in your install.log and happily continue on. Lucky for us this, isn’t the last command executed in the script. Speaking of, what is the last command in this script? It used to be launchctl commands that naively assumed they would always succeed in loading a LaunchDaemon. See the line at the end beginning with ``${OPEN}`.

We all love installers that call open after the installation run has finished, but they’ve at least done the right thing of checking for the existence of the COMMAND_LINE_INSTALL environment variable set by the installer framework when doing command-line installs.

But nested within that is the baffling GetDefaultBrowser function that seems to try to figure out your user’s default browser setting by combing through the LaunchServices plist and defaulting back to com.apple.safari. My immediate reaction that this function would exist for handling something like Google Chrome, which has no support for the Java plugin as it’s not yet 64-bit. But no, it just wants to know the bundle ID associated with the http URL scheme, so that it can pass it over to open -b, rather than trusting that open would do the right thing (use the default URL handler) with the http:// URL being given to it.

On my system, where I don’t install packages as my own user (because I’m not an admin), this failed when it managed to find a downloaded Chrome app bundle in my admin user’s Downloads folder and tried to open the URL with that. This could similarly fail if you happen to do one-off installs by a local admin user on a desktop support call, if your admin user happens to have some history on the computer. Because this command on line 33 is the last command run in the script, the postinstall command exist non-zero and the install fails with no evident reason why, until I check the install log, see the first traceback error and realize I can safely ignore it, and then find the real cause of the error.

Deploying Java via a management utility like ARD, Casper or Munki should luckily always bypass this function invocation in the script altogether via setting COMMAND_LINE_INSTALL, but this is simply extremely poor form. No one should be putting scripts like this in a plugin installer that’s widely used. Rich Trouton has helpfully documented where you can go to file a bug report to Oracle.