In the past, there have been cases where system updates for 10.8.5 (and possibly earlier versions) leave the OS X kernel (at /mach_kernel) visible to users in the Finder. This file has since moved to /System/Library/Kernels/kernel in OS X Yosemite, but previously to Yosemite it is located at /, and included in the package payload for system updates like OS X Combo/Delta and Security Updates.

OS X installers and updaters typically keep this file hidden in the Finder using a tool called SetFile, which is able to set miscellaneous file flags including the “hidden” flag. The Security Update 2015-002 for Mavericks, released on March 9, 2015, does not include any of the postinstall “actions” (miscellaneous scripts and tools executed by a master script) in the installer that were present in the 2015-001 update. 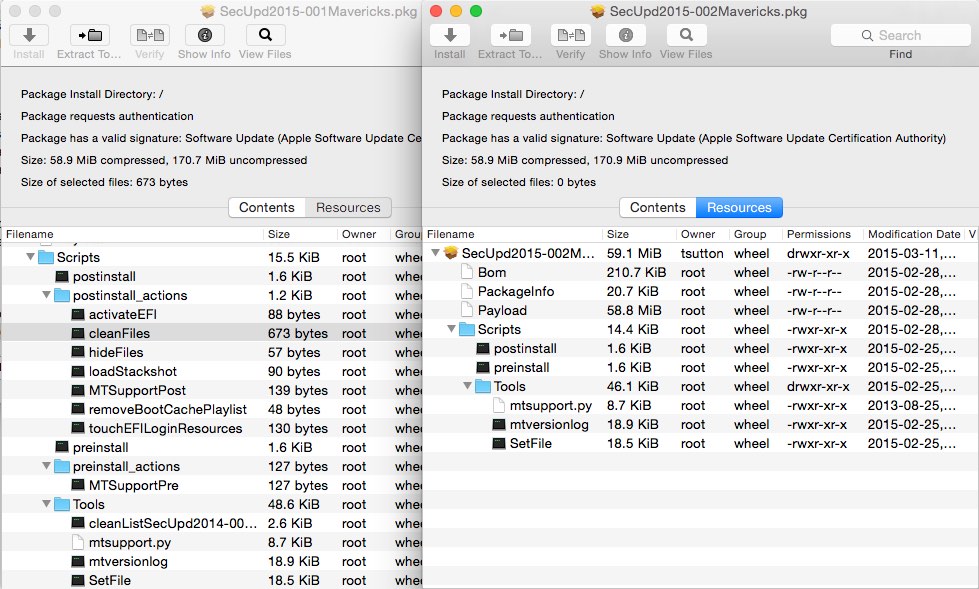 We have few admin users at my organization, but it has happened at least once that a curious admin user has wondered what this “mach_kernel” file is and moved it to the trash, only to find that their system volume will no longer boot.

Why does Apple continue to ship this bug when they have a knowledge base article on it?

Why does Apple not simply set the hidden flag in the file in the package payload, rather than depend on setting it according to a script? It is possible to set these flags on the file in a payload and not require any scripting to set a hidden attribute on a file.

We can fix this easily by distributing a script to clients that would do something like this:

While Apple’s acknowledged this issue given their knowledge base article, I still felt it’s worth opening a bug for.