Nearly ten years ago, I published a post about how to download and deploy the iOS simulator runtimes independently of the Xcode app bundle. This is certainly the oldest post on the blog that I could say was still useful and accurate!

Prior to Xcode 14, one could navigate to the ‘Components’ section of the app preferences and download previous simulators. Under the hood, a “dvtdownloadableindex” plist file would be downloaded from Apple, containing metadata and templated URLs to download installer packages containing the full simulator runtime operating system packages, and then installed directly to the host’s filesystem inside /Library/Developer/CoreSimulator/Profiles/Runtimes. This resulted in a lengthy installation time due to the huge number of files (watchOS 9 simulator alone is over 180K files), and Xcode’s interface provided no method (that I could find, at least) to remove these large runtime packages, leaving you to figure out where they’d been installed and remove them yourself.

Xcode 14 makes some big changes to this underlying infrastructure:

Apple now has their own documentation on some of this, which you can find here.

At the time of writing, Xcode 14.1 is in beta, including the iOS 16.1 SDK and simulator runtime. And as one might expect, we can ask Xcode 14.1 to download the iOS older 16.0 runtime using the + button in the bottom left corner to access previously-released simulators: 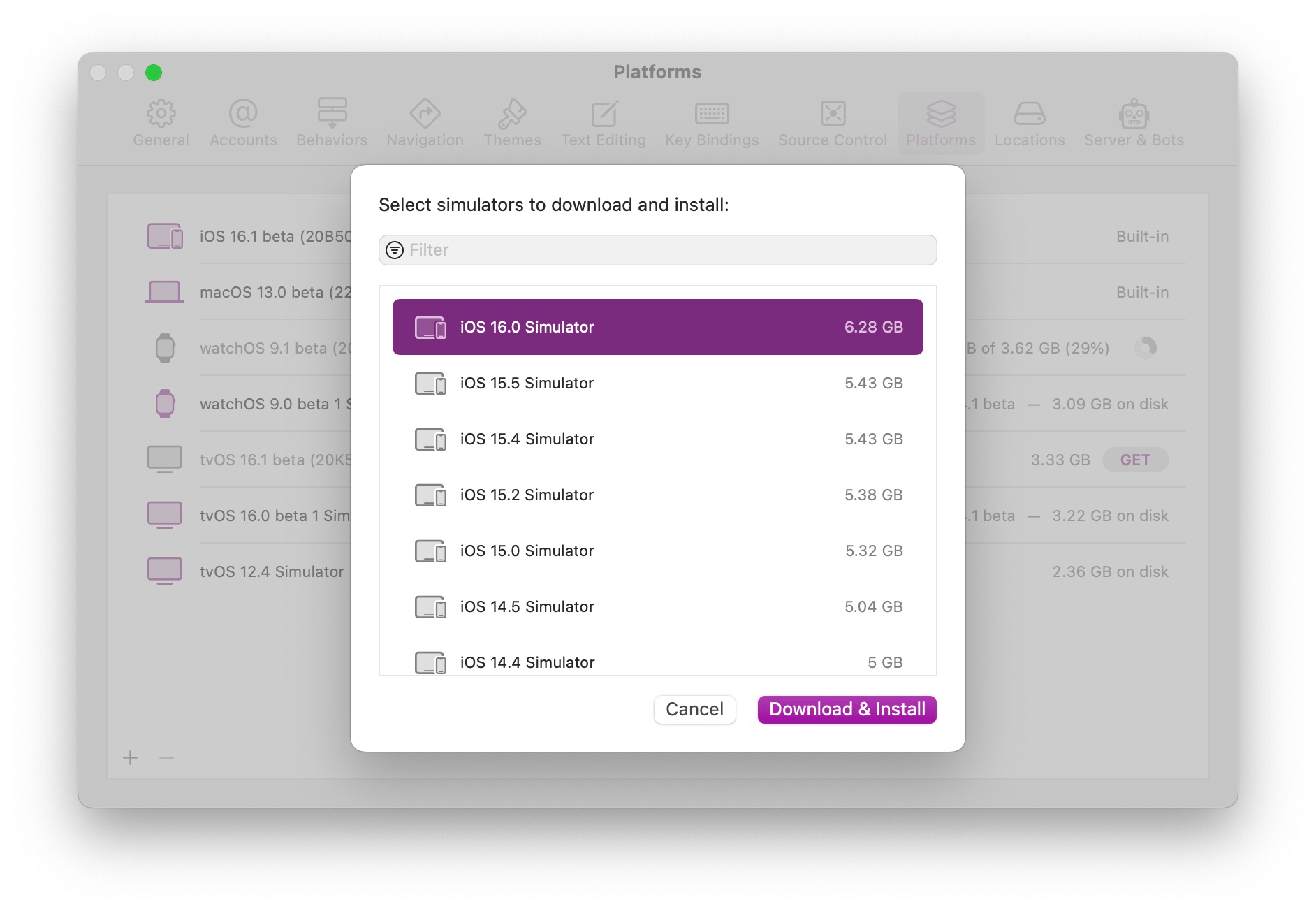 New view displaying all previously-released iOS simulators – 16.0 is the first iOS Xcode downloadable to use the new DMG instructure.

The new simdiskimaged process will manage keeping these runtimes’ filesystems mounted at the special mountpoints as they are needed by the system. My experience has been that this process will start up when Xcode or xcodebuild is first used, and then these volumes will stay mounted indefinitely.

As an experiment, I unmounted my watchOS runtimes using Disk Utility, and expected simdiskimaged to simply re-mount it when it would determine it was needed; xcrun simctl runtime list had still shown it in a “Ready” state. However, Xcode seemed to disagree: it no longer showed watchOS as an available simulator and its Platforms view indicated it was not installed. So, it stands to reason that one should leave the mounted simulator runtimes alone when they happen to turn up in Disk Utility or via the diskutil CLI tool.

There’s a couple new things to like about the newer metadata file that Xcode uses to present and download these runtimes.

Previously, the DVT Downloadables index URL included a GUID from an Xcode tooling version that would change across different versions, and so one would generally need to have an active Xcode installation and a Mac just to know the index URL. The new index URL is just a stable URL, which makes it easier to automatically scrape using some internal monitoring script or tool:

The contents of the index was also not super friendly to human parsing when one just wanted to download the runtime disk images, with many values being template placeholders like https://devimages-cdn.apple.com/downloads/xcode/simulators/$(DOWNLOADABLE_IDENTIFIER)-$(DOWNLOADABLE_VERSION).dmg, which required some mental effort to put back together and were a couple nested layers deep. The new format is more condensed and simply contains the full URLs verbatim for the older package-based runtimes, and includes the new dmg-based runtimes in the same file.

In this plist file, you can parse the contentType key and look for either diskImage (the new format) or package (the old format).

Here’s iOS 15.4, for an example of how the older package-based format looks:

Not much changes for iOS 16.0, besides using the new diskImage content type and the authentication key (more on that further down in this poast). We also seem to have finally dropped the need to put Unix epoch dates in the package version (I presume these may have been to appease the Installer framework):

With previous sim runtimes, one would use Apple’s sim runtime installer package and need to resort to gymnastics to expand the contents in the expected location (because Xcode’s installation uses a private Installer framework API), and then wait several minutes for all those tiny files to write to the filesystem. This time adds up if you’re repeatedly setting up build hosts that need multiple different runtime versions for tests.

The new system is now faster, while still supporting automation using Apple’s CLI tools. Now, simply stage the DMG onto your target system using your method of choice, and pass it to the new xcrun simctl runtime family of commands:

There is an additional verification step that will take place after the this runtime add command has returned, and runtime list -v will output something like this during the process:

..you’ll see the system policy security evaluation process spinning for a short while: 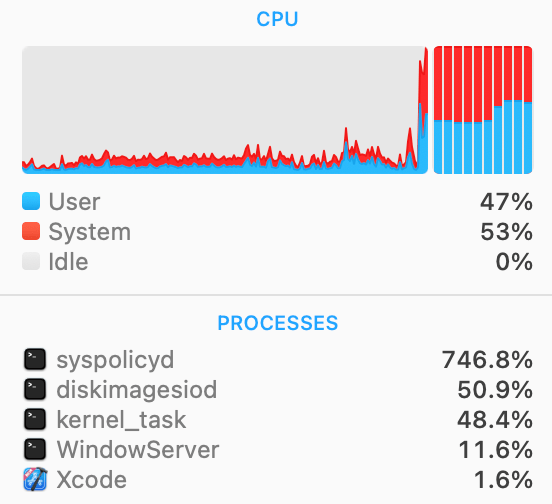 ..and then a familiar ‘verifying’ UI in the Finder:

Let’s look into the change related to the new authentication key in the above dvtdownloadable metadata. This is also new for the new DMG-based format. Previous simulator runtime download URLs were always possible to download anonymously. But, you may have noticed that Xcode never requested any ADC login in order to install these new runtimes. So, how did that work?

Xcode simply passes the runtime download path to a special endpoint at this host: developerservices2.apple.com, and receives a response containing the Set-Cookie header containing a ADCDownloadAuth cookie, which it then uses to fetch the original URL contained in that dvtdownloadable item. For example, to download the tvOS 16.1 beta simulator, it first makes the request to:

..and then the cookie it returns can be used to fetch the original URL:

A nice side effect of this change, is that this ADC auth cookie can now be obtained and used to download Xcode itself, meaning that for the first time ever, it is now possible to download Xcode .xip files from ADC without needing to authenticate! This is handy for the use-case of setting up automation to fetch and archive Xcode installers on internal servers, which was often trickier to do because of Apple’s general 2FA requirement on Apple IDs.

Overall, the new DMG-based distribution is a win for its shrinking down Xcode’s default install size, speeding up the installation of new runtimes, and improving the ergonomics for managing them. We didn’t discuss the security improvement in the tools here either, but it stands to reason that up-front signature verification and Gatekeeper assessment of the runtimes is also a very welcome addition.

Update: Since originally publishing this post, I wrote a small utility that can be used to list and download available simulators, using the details described in this post. It’s called speedwagon, and you can find it (along with binaries for multiple platforms/architectures) here on GitHub.