In Mavericks, the Xcode Command Line Tools can be downloaded from the ADC downloads page like with previous versions. Now, though, they can be also be installed on-demand in a similar fashion to how Java has been installed since Lion, by simply invoking a command installed by them such as otool, or a new option in the xcode-select utility: --install. 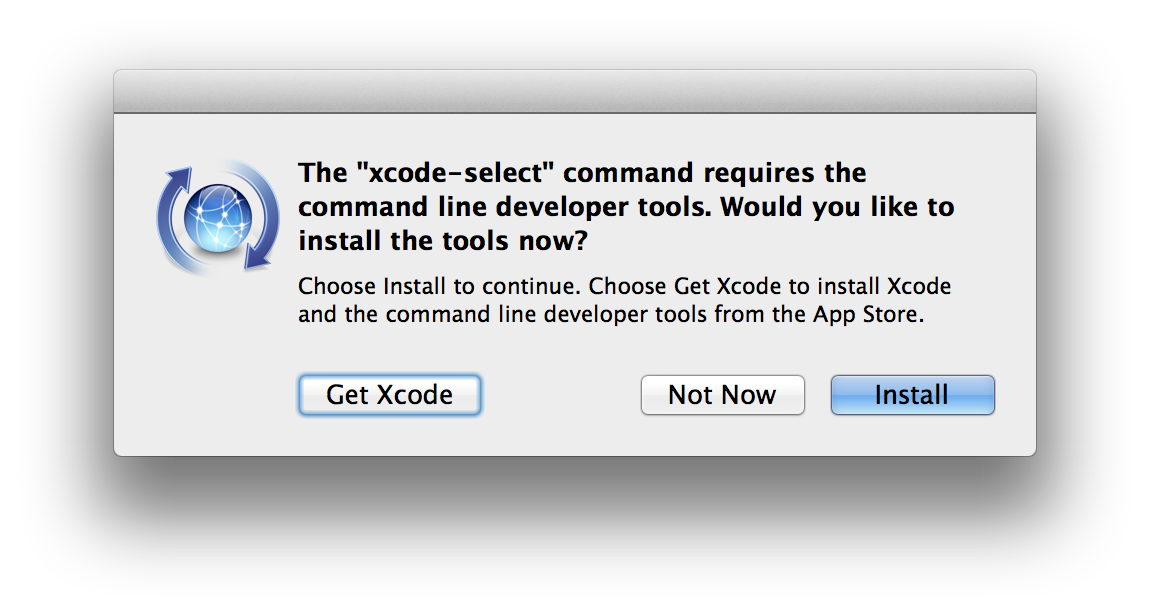 In this post we’ll look at how you can trigger and run this installation in an automated way, eliminating the need for any user interaction.

We can guess from the dialog window that this mechanism might use Apple’s Software Update servers as the source of the installer. You’d also already know this if you run your own Software Update service or Reposado (which is also included in JAMF Software’s NetSUS appliance), and could have been syncing the Mavericks SUS catalog since June.

This task is a great opportunity to get familiar with how you can use an update’s .dist file to identify what criteria makes an update “available” when the Software Update framework is invoked on a client.

Reposado makes this easy: get the list of updates with repoutil --updates, and note the item for the CLI tools:

Now print out an update’s dist by passing its ID to the --dist option:

We get back a bunch of XML, much of which is JavaScript code that the client will run in order to evaluate whether this update applies to it. Here’s a section that looks interesting (and is even commented more than usual):

The trigger mechanism is spelled out here. There are other checks within in this .dist’s script tags that must be satisfied, for example the OS must be 10.9, and the user must not have already the receipt for this package present on the system. But here we can see the extra bit that the GUI helper application does for us: it touches a temporary file at /tmp/.com.apple.dt.CommandLineTools.installondemand.in-progress so that when functions in the Software Update framework are called, the helper application can find and install the appropriate update.

Similarly, Rich Trouton has also (of course) previously documented the trigger necessary to do an automated install of the latest Java 6 update available in Software Update, which uses an environment variable instead of a trigger file.

The tags are something that the Software Update framework or helper tools can parse to filter out candidate update packages. These are usually used by system tools and preferences other than `softwareupdate[/cci] itself, for example for finding Boot Camp ESD packages, printer drivers and speech assets.

Now that we’ve taken a side-tour of Software Update .dist files and how you can make use of them to identify how OS X software updates are parsed and selected, let’s get back to why we’re here: to install the CLI tools on Mavericks (and future OS X versions that will hopefully continue to use this mechanism). Now that we know the trigger file needed, the rest is straightforward.

A simple, though not exactly clean, way to do this is to scrape the output of the softwareupdate utility to extract the label for the update we want. I have a general-purpose script for installing Xcode CLI tools on 10.7 through 10.9 here.

By looking for the word “Developer” and then passing softwareupdate the label next to the asterisk in the line above.

This is less than ideal, because if either the wording of the update, or the command output formatting of softwareupdate were to change, this tool would break and we would need to fix it.

An better alternative might be to look at the contents of /Library/Updates/ProductMetadata.plist after running softwareupdate -l, and search the tags that were already extracted for us in a nice structured format. We find an item like this:

Unfortunately, the “label” that softwareupdate can take to install a specific update still needs the longer version (“031-1006-5.0.1.0”), so we’d need to do even more work to do this using only structured data.

One way would be to look at the com.apple.SoftwareUpdate any-user defaults domain and the RecommendedUpdates key:

We could find our ID in the Identifier sub-key, then take the value o that item’s Display Version key, then feed both of these to softwareupdate joined by a hyphen. This would eliminate the need to do any kind of parsing of the softwareupdate command output.

Because all this work would require sifting through plist contents, it’s probably no surprise that I’d recommend Python to do this; besides having easy support for working with plists mapped to native data structures, on OS X it can also natively access the com.apple.SoftwareUpdate preferences domain using Objective-C (via the PyObjC framework). So, this is left up for either a rainy day and/or an exercise for the reader. In the meantime, the less-than-ideal shell script version works.